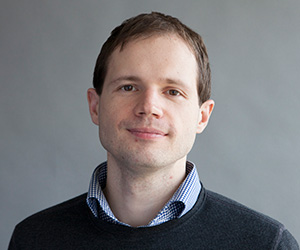 PHOENIX — Cezary Podkul, a financial investigative reporter for ProPublica is this year’s winner of the Larry Birger Young Business Journalist prize, honoring journalists under age 30. He will receive the award and a $1,500 honorarium Oct. 9 at SABEW’s New York Fall Conference in midtown Manhattan.

It is the second year for the competition. Last year’s winner, Mina Kimes, will also be in New York to congratulate Podkul.

Made possible by a $7,500 gift from rbb Communications of Miami, Fla., the award commemorates Birger, a former Miami Herald business editor who led SABEW as president in 1977. Birger was later a principal in rbb until his death in 1998. Josh Merkin, Vice President, rbb will present the award to Podkul in New York, Oct. 9. “Larry Birger played an important role in the development of business journalism and it gives us great pleasure to recognize his legacy through this award to Podkul,” said Merkin.

The judges noted Podkul’s stellar work over a variety of publications, including USA Today, The Washington Post and Reuters, where he worked most recently before joining ProPublica last year. His work for USA Today helped free-up hundreds of millions in unspent highway funds earmarked by Congress for pet projects. He has covered energy and commodities and the private equity industry, among other beats, after leaving investment banking in 2008 to pursue journalism.

Cezary, 31, earned a B.S. in economics from the Wharton School at the University of Pennsylvania and is a 2011 alumnus of the Stabile Center for Investigative Journalism at Columbia Journalism School, where his master’s thesis on unspent highway earmarks developed into the eventual USA Today report and was featured on NBC Nightly News. Cezary turned 30 during 2014 meeting the award eligibly requirements. In addition to being a SABEW member, he also serves on the board of the New York Financial Writers’ Association.

“I’ve never wanted to do anything but business and financial journalism, so being able to follow Larry’s footsteps is a true honor. I’m thrilled and humbled to be this year’s winner,” Podkul said.

“The SABEW judges were impressed by the high level of writing and reporting skills shown by this year’s candidates for the Birger award. It wasn’t easy for us to narrow down the list,” said Jon Chesto, the judging panel chair and a business reporter for the Boston Globe. “There’s obviously plenty of concern and cynicism about the overall direction that journalism is taking, in an era of budget cutbacks and declining ad sales. But this crop of candidates shows that talented young journalists can still find plenty of ways to do great work, the kind of stories that leave a lasting impression,” said Chesto.

“We are grateful to rbb Communications for this opportunity to advance SABEW’s commitment to supporting the next generation of business journalists. Podkul has already agreed to pay-it-forward by helping SABEW train and recruit other young professionals,” said Kathleen Graham, Executive Director, SABEW.

About SABEW:
SABEW is the largest organization of business journalists in the world. For more information, contact Kathleen Graham at kgraham@sabew.org.

About rbb Communications
rbb Communications is a national marketing PR firm with a reputation for delivering award-winning results to clients who appreciate the individual attention only a boutique agency can provide. The bilingual staff offers best practices in media relations, corporate and crisis communications, product introductions and digital/social media. For more information, call (305) 448-7450 or visit www.rbbcommunications.com.