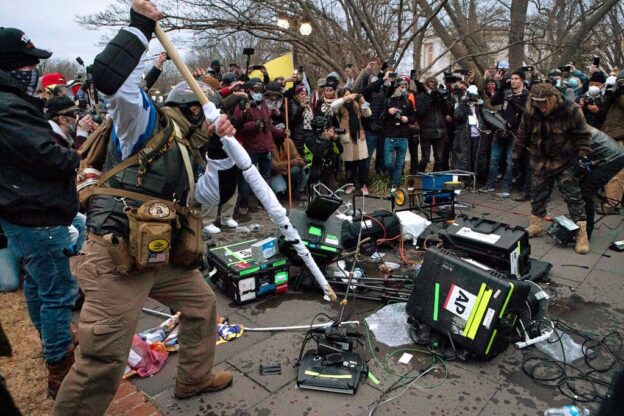 The Society for Advancing Business Editing and Writing (SABEW) marks the one-year anniversary of the insurrection at the U.S. Capitol with renewed concern about attacks on journalists and news organizations in the nation and around the world.

As we stated after the insurrection on Jan. 6, 2021, journalists should never be subjected to verbal abuse, physical threats and destruction of news-gathering equipment while reporting the news.

During the past year, courageous members of the press have reported on the events leading up to, during and following the Capitol assault. Reporters continue to expose new facts about attempts to subvert the democratic process and the peaceful transition of power that has been the hallmark of presidential transitions for more than two centuries.

These efforts serve as a reminder that interference with governmental operations is a threat to organizations that financial journalists rely upon for economic data, which is essential to the functioning of our free enterprise system.

From a global perspective, these are difficult times for those who advocate for a free press. The Committee to Protect Journalists reported that the number of journalists jailed for their work “hit a new global record of 293, up from a revised total of 280 in 2020.” The number of journalists killed because of their coverage was 24, with 18 others killed under circumstances “too murky” to make a determination, CPJ reported.

Journalists are truth tellers, not “enemies of the people.”  The public deserves to know the truth about January 6 and journalists must be free to report and write on economic issues without fear or favor.