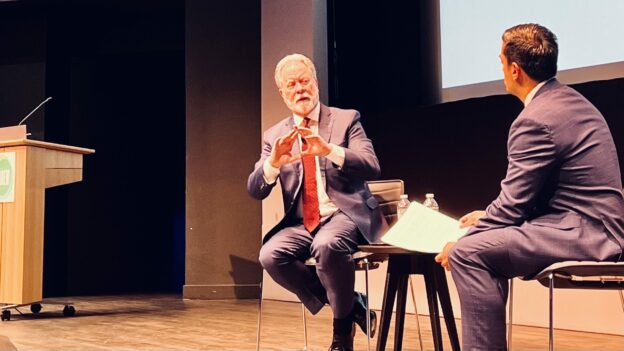 President Biden and NATO leaders met in Madrid last week for a consequential summit on security. Among the topics was the pledging of continued support for Ukraine. Russia’s war against Ukraine has caused major disruptions to global trade with the prices of grain and wheat soaring amid a blockade of Ukrainian seaports and sanctions on Russian commodities such as oil, gas and fertilizer.

In May, #SABEW22 featured David Beasley, executive director of the U.N. World Food Program, using food as a weapon in war. Hear how he talks about how 2022 is a “pricing problem” and 2023 will be a “food shortage problem compounded by the war.”

According to Beasley, Ukraine and Russia produce 30% of the world’s wheat supply, 20% of its corn and 75%-80% of the sunflower seed oil. The World Food Program buys 50% of its grain from Ukraine.

Beasley’s newsmaker session at #SABEW22 took place on May 12 at the Dotdash Meredith New York office in the city’s financial district. #SABEW22 was a two-day event, themed Moving Forward – The future of business and the economy in the “new, new normal,” preparing attendees for future business and economic reporting with content, skills, and newsmakers covering a broad range of business topics.

Watch all the #SABEW22 sessions here.