The following are recorded webinars for business journalists. Our education committee has also created “how we did it” podcasts for journalism educators to use in journalism classrooms. Check them out.

Nov. 10: Post-Election Impacts on Business and the Economy

Oct. 25: Nailing Down the Numbers

Aug. 26: The Business of Sports

March 3: Covering the Economic Impact of Russia’s Invasion of Ukraine

Jan. 28: The Gagging of America

Dec. 16: How to Cover the Great Recession

Nov. 17: Reporting on Bankruptcies and Debt

Nov. 1: Strategies for Landing Jobs and Internships in Business Journalism

Sept 28: How to apply to a top journalism internship. Insider tips from new and veteran journalists

END_OF_DOCUMENT_TOKEN_TO_BE_REPLACED 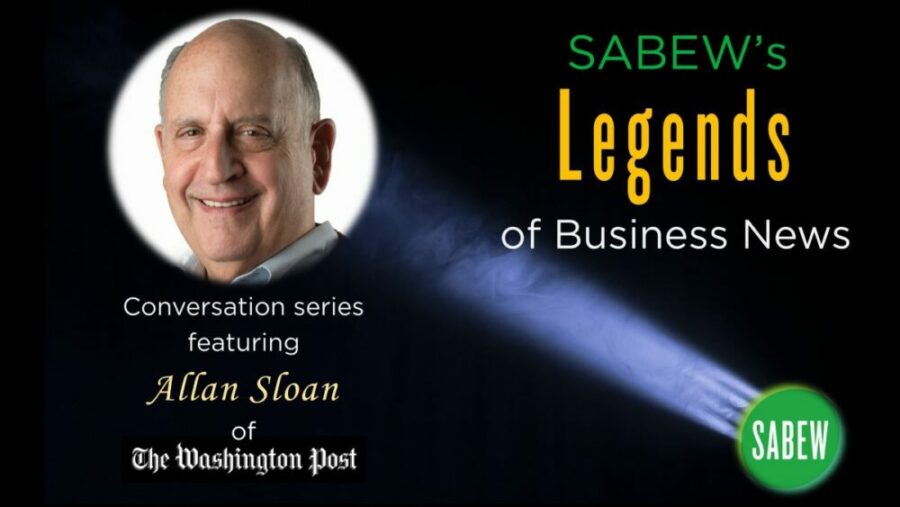 Reserve your spot now by filling out form below

Allan Sloan, one of the nation’s best-known business journalists, will be interviewed by Andy Serwer, editor in chief for Yahoo Finance, about his legendary career on Tuesday, Nov. 29, as part of SABEW’s Legends of Business News conversation series.

Sloan has been writing about business for more than 50 years. He has won seven Loeb Awards — business journalism’s highest honor — in four categories (including lifetime achievement) with five news organizations over four decades. He also received SABEW’s highest honor – its Distinguished Achievement Award – in 2001.

Sloan, who calls himself “a recovering English major,” currently writes columns for The Washington Post. He was previously a senior editor-at-large at Fortune magazine, Newsweek’s Wall Street editor and a columnist at Newsday. Sloan wrote for Forbes and Money, among other publications, and has appeared on television programs including Charlie Rose, The Colbert Report and C-SPAN, as well as on American Public Media’s Marketplace Morning Report radio program, carried by NPR.

He is a graduate of Brooklyn College and has a master’s degree in journalism from Columbia University. He and his wife live in New Jersey and have three grown children and four grandchildren.