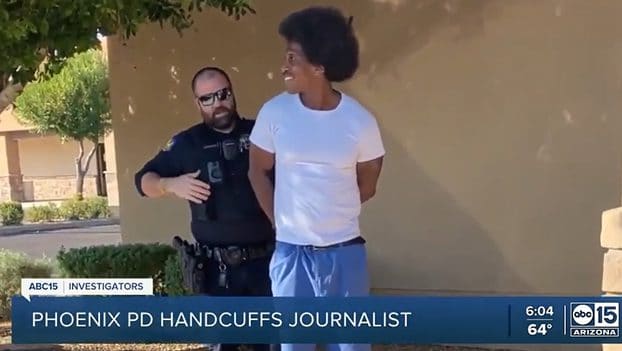 Statement: SABEW troubled by lack of comment by Phoenix Police on WSJ reporter

(photo is screenshot from ABC15)

SABEW issued the following statement regarding the lack of public comment from the Phoenix Police Department who detained a Wall Street Journal reporter conducting interviews:

The Wall Street Journal released the following statement: “We’re deeply concerned that Wall Street Journal reporter Dion Rabouin was detained, handcuffed and placed in the back of a police vehicle while reporting. We have asked the Phoenix Police Department to pursue a thorough investigation into the incident and explain why their officers needlessly escalated the situation and took these aggressive steps. We await their response. No journalist should ever be detained simply for exercising their First Amendment rights.”

Matt Murray, editor in chief at The Wall Street Journal, also wrote a letter to the Phoenix Police Department about the incident.

The Phoenix Mayor Kate Gallego and Chase Bank executives personally apologized to Rabouin. Phoenix is under a Department of Justice pattern of practice investigation with a key focus on the violation of people’s First Amendment rights.

SABEW will update members as we learn more about the results of the investigation. SABEW’s First Amendment Committee extends our support to Rabouin and his colleagues.