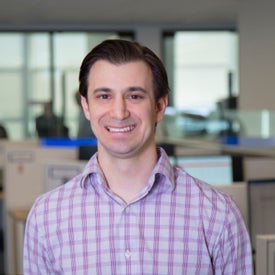 Matthew Goldberg is a consumer banking reporter at Bankrate.

Nearly his entire career has either been as a reporter or working in financial services, in banking and insurance. His reporting career includes working as a staff reporter at two daily newspapers. He earned his first newspaper bylines in 1998.

He has been honored by both the Illinois Associated Press Editors Association and the Illinois Press Association. His writing has been featured online on MSN, the Miami Herald, the Houston Chronicle, the Omaha World-Herald, The Kansas City Star, the Arizona Daily Star, and appeared in Sports Illustrated On Campus, The Atlanta Journal-Constitution, The Buffalo News and other publications.

Matthew’s radio experience includes being a weekly panelist on the SportsWriter’s show on WGEM AM ESPN 1440 in Quincy, Illinois. He was also an occasional co-host and call-in guest on WGEM SportsCenter. He’s also been a guest on stations throughout the country.

Matthew is currently a member of the Board of Governors at the Society for Advancing Business Editing and Writing (SABEW), which is the world’s largest and oldest organization of business and financial journalists.

He is on the organization’s training and finance committees. He has previously served on the New York City, Phoenix and spring 2021 conference planning committees and has been a Best in Business contest judge for the organization.